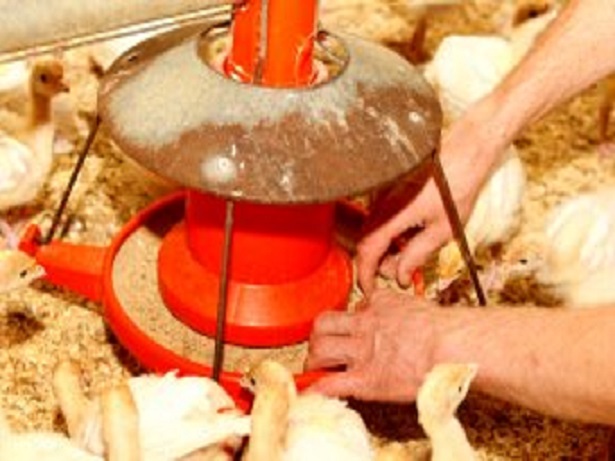 In one study, the use of 50g/kg of calcium propionate as an appetite suppressor resulted in gains of birds close to those obtained under a recommended program of quantitative feed restriction between 2 to 6 weeks of age. Glycolic acid has also been used as a chemical means of restricting feed intake of broilers. The feed intake of birds given diets supplemented with 1.5% and 3% glycolic acid was depressed by 17% and 45%, respectively. These reductions in feed intake due to glycolic acid supplementation resulted in growth retardation during the under nutrition period to 71% and 41% respectively, relative to the growth of control birds. Male broilers exhibited complete body weight recovery at 49 days of age, with no difference between the birds restricted by the dietary glycolic acid addition or those subjected to physical feed restriction. Due to its natural occurrence, glycolic acid may serve as a safe and useful anorectic compound for restricting feed intake in poultry. 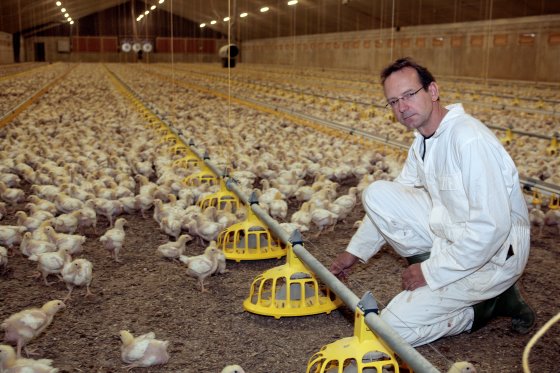 In one study, the use of 50g/kg of calcium propionate as an appetite suppressor has resulted in gains of birds close to those obtained under a recommended program of quantitative feed restriction between 2 to 6 weeks of age. Photo: Studio Kastermans

Duration and timing of restricted feeding

The longer the period of underfeeding, the more difficult it is for broilers to compensate for the reduction in weight gain. Most workers recommended feed restriction of not more than 7 and 5 days for male and female broilers, respectively, to allow for full body weight recovery. The restriction of the feed intake of birds to 90% of that of control birds from 7 to 49 days of age has resulted in a significantly lower final body weight at 56 days of age, probably due to the insufficient time allowed for the birds to exhibit complete growth compensation.

Initiation of 6 days feed restriction at any age between 3 and 11 days of age seems to permit complete body weight recovery by 8 weeks of age in broilers. On the other hand, when initiating a feed restriction program at 3 weeks of age, very little evidence of compensatory growth has been noticed, probably because of the little time allowed for recovery.

The largest and most obvious fat depot is the abdominal fat pad which may comprise up to 4% of body weight. The abdominal fat is usually discarded at processing each year, the cost of which is directly or indirectly charged to the consumer, thereby presenting an additional economic burden.

Table 2 - Effect of various early feed restriction systems on theamount of abdominal fat formed in the body of broiler chickens.

In addition to the economic problems associated with the excessive fat formation, the type of fat formed in the carcass is not guaranteed in all instances. Varying amounts of undesirable cholesterol, for example, may result from the formation of a greater amount of saturated fatty acids relative to the unsaturated ones in each molecule of fat being formed in the chick’s body. This inevitably leads to possible health hazards for the consumer, unless strict precautions are taken.

The cholesterol problem may be alleviated by feed restriction. In one study, the cholesterol level was reduced from 132 to 109 mg/ml when chickens were feed-restricted. This was probably due to the fact that feed restriction decreases the hepatic 3-hydroxy-3-methyl glutaryl Co-A reductase activity in chickens, a rate-limiting enzyme in chlostrogenesis and that the activity of this enzyme is not recovered by re-feeding.

Early fast growth in modern broilers is associated with increased stress on the birds and can result in metabolic and skeletal disorders that lead to economic losses due to reduced animal performance, high mortality rates, and carcass condemnation at slaughter houses.

In one study, ascites mortality was significantly reduced when a feed restriction regimen was used from either 4-11 or 7-14 days of age, consisting of limiting daily intake of the birds to 75% of the ME required for normal growth.

Sudden death syndrome (SDS) is also a metabolic problem that occurs in all countries where broilers are grown rapidly under intensive conditions. Mortality may start as early as 3 to 4 days, but most often peaks at around 3 to 4 weeks of age, with the affected birds being found dead on their back. Mortality may range from 1.5 to 2.0% in mixed-sex flocks and as high as 4% in male flocks. Lowering energy intake by changing feed texture or density (mash), or management methods such as feed restriction or long dark periods will reduce mortality from SDS. A mortality level of 0% has been reported for feed-restricted birds compared to 3.33% under ad libitum feeding.

Other benefits of restricted feeding

Feed restriction has a beneficial effect on the immune response of chickens through the expression of some cytokines including IL-4 and iNOS. Cytokines are small glycoproteins produced by a number of cell types, predominantly leukocytes that regulate immunity, inflammation, and hematopoiesis. They regulate a number of physiological and pathological functions including innate immunity, acquired immunity, and a plethora of inflammatory responses.

Feed restriction may also be used as an effective means of combating the cold stress effects on poultry. Under cold temperature, there is an increase in the metabolic rate of the broiler, with a resulting high oxygen requirement and thus an imbalance between the respiration system and the high oxygen requirement, leading to a state of systemic hypoxia. The resulting systemic hypoxia triggers increased generation of reactive oxygen species (ROS) in mitochondria. When the rate of generation of ROS exceeds the protective capacity of antioxidant, the excess ROS oxidises proteins and DNA within the cell, damages the polyunsaturated fatty acids on the bio-membrane, and initiates lipid peroxidation chain reaction. Lipid peroxidation severely damages the cell membrane and compromises cell function, mainly by damaging the vascular endothelium cells, causing vasoconstriction, thrombosis and vascular remodeling, which then lead to an increase in pulmonary artery resistance and pulmonary hypertension. These changes had been attenuated by early time feed restriction. Feed restricted broilers had a lower body weight and consequently reduced metabolic rate and oxygen requirement, which leads to a reduced generation of ROS and lipid peroxidation and hence improves resistance to the invasion of diseases and reduce mortality.

From the economic point of view, feed costs per kilogramme live weight and return over feed costs per bird were in many cases affected by restricted feeding as a result of improvements in health, viability, and feed conversion rates. Also, when feed is restricted through manipulation of the lighting system, the electricity costs will be reduced and the feed efficiency will be improved, as indicated earlier, both factors will contribute to higher profits.