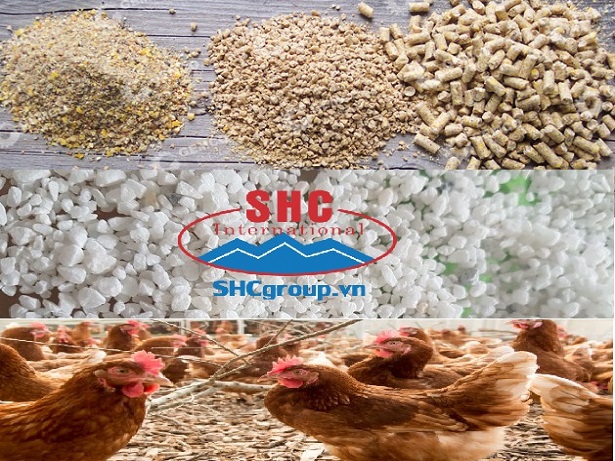 By improving the overall digestibility of feed, performance of laying hens can be further optimised, as shown by some layer specific digestibility studies. This can help to reduce costs for the poultry farmers.

The egg industry faces many challenges such as reduced margins, changes in production models and reduction of antibiotic usage. Thus, the move to cage-free eggs spreading from Europe to the rest of the world will require significant investments in alternative housing and increase costs of production. Whilst previously free-range eggs enjoyed a price premium, if this becomes the norm then margins are likely to be squeezed. Producers are therefore looking to nutritionists to optimise performance, whilst reducing feed costs, in order to preserve margin. One solution is to improve the nutritional value of the raw materials, enabling a reduction in the nutrient density of the diet. Scientists have been working on how to reduce the anti-nutritional factors (ANFs) in feed ingredients, such as non-starch polysaccharides (NSPs). These NSPs increase digestive viscosity and enclose nutrients such as starch and protein making them unavailable for poultry. Additionally, the endogenous secretion of water, protein, electrolytes and lipids can increase when high level of NSPs is present in the diet. 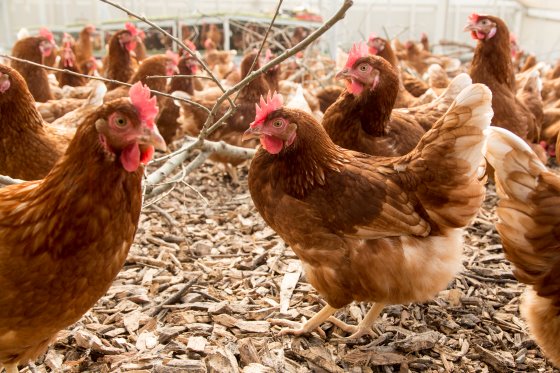 The feed effect in layers

The ability of an enzyme to improve global feed digestibility is known as the feedase effect. It has been well described in broilers, but new research demonstrates how laying hens can also benefit. The action of xylanases and de-branching enzymes such as arabinofuranosidases are key to addressing the main ANFs present in cereals. Their synergistic action efficiently breaks down the arabinoxylan chains, making nutrients more available for endogenous enzymes. This effect improves the release of energy and nutrients including amino acids and phosphorus from feed. Thanks to this feedase effect, nutritionists can reformulate diets, reducing feed cost without any negative impact on layer growth performances.

In order to accurately evaluate the feedase effect, laying hen specific digestibility studies have been carried out. Hens were ad-libitum fed nutritionally adequate wheat, barley and soybean meal diet (control), with or without an enzyme solution (feedase). The addition of the enzyme solution increased the apparent metabolisable energy (AME) by 2.74% (Table 1), which is associated with ANF breakdown and a better overall feed digestibility. Enzymes target the indigestible fraction of the feed, making part of it digestible. The larger the indigestible fraction of the diet is, then the greater the potential for the enzyme to improve nutrient availability. However, it is not simply a case of fibre level but the amount of the nutrient content that is associated with fibre structures. This is why it is important to have specific nutritional matrix for the enzyme. Broiler studies have shown that the feedase effect improves AME and amino acid digestibility by on average 3%.

Having demonstrated that the feedase effect is able to improve AME and the digestibility of amino acids (dAA); the next step is to assess laying hen performance when fed diets with a lower nutritional density. A commercial diet based on corn, DDGS and soybean meal was formulated as a positive control (PC) which meets or exceeds layer requirement. In addition, the negative control (NC) diet was formulated with reduced AME and dAA content by 3%. The negative control diet was supplemented or not with an efficient enzyme solution (feedase). The effect of the enzyme was influenced by the diets nutrient content. Reducing the nutrient density of the diet significantly increased feed intake by 4.5 grams a day and feed conversion by 4.2% for the NC (Figure 1). The feedase effect was able to improve laying hen performance on the NC diet, bringing it back to the same level as the PC diet.

Figure 1 – The feedase effect on feed intake and feed conversion. 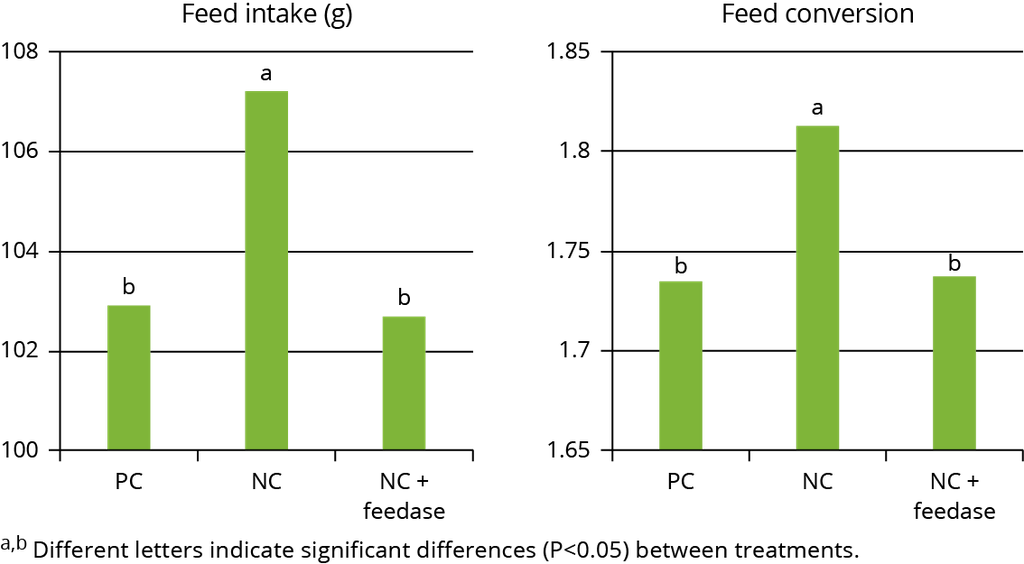 Another study looked at the effect of feeding a corn-based diet with reduced AME (-65kcal/kg or 2.3%) and dAA (-4%) levels (NC). Egg production parameters were monitored during the period between 28 and 40 weeks of age. Hens fed a ration lower in nutrients laid significantly fewer eggs, producing an overall lower egg mass (Figure 2), than the laying hens fed the PC diet. However, by introducing the feedase effect to the NC diet, laying performance was statistically equivalent to that of the PC diet. The results of these trials show that the feedase effect allows a reduction in nutrient density, and hence diet cost, without any loss in performance or egg production.

Figure 2 – The feedase effect on laying rate and egg mass. 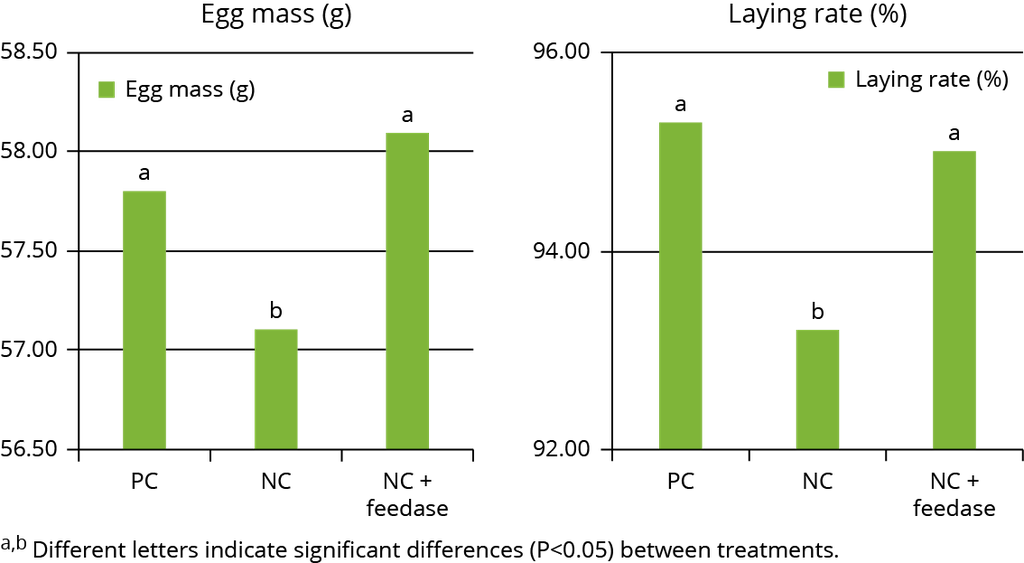 When producers are planning for changes in management strategy, such as cage or antibiotic free, nutrition should be discussed in order to bring back extra margin. Feed is the biggest cost for egg production and if it can be reduced, industry profitability will benefit. Reformulating on energy and amino acids will save a minimum of € 10 per tonne of feed, whilst maintaining layer performance. The feedase effect can be applied to a wide range of raw materials. In order to predict the improvement it will make, the amount of undigested starch, protein and fat must be known. It is important to use a customised nutritional matrix dependent on the ingredients and nutritional specification of the diet. The feedase effect can also help to achieve longer-term industry goals of sustainability; minimising environmental impact, by reducing both inputs and waste.

With egg producers under pressure, nutritionists can help by reducing feed costs, whilst optimising performance. The indigestible fraction of feed is reduced by efficiently breaking down plant cell wall structures using carbohydrase enzymes. This feedase effect improves overall feed digestibility, hence the availability of energy and all nutrients increases.